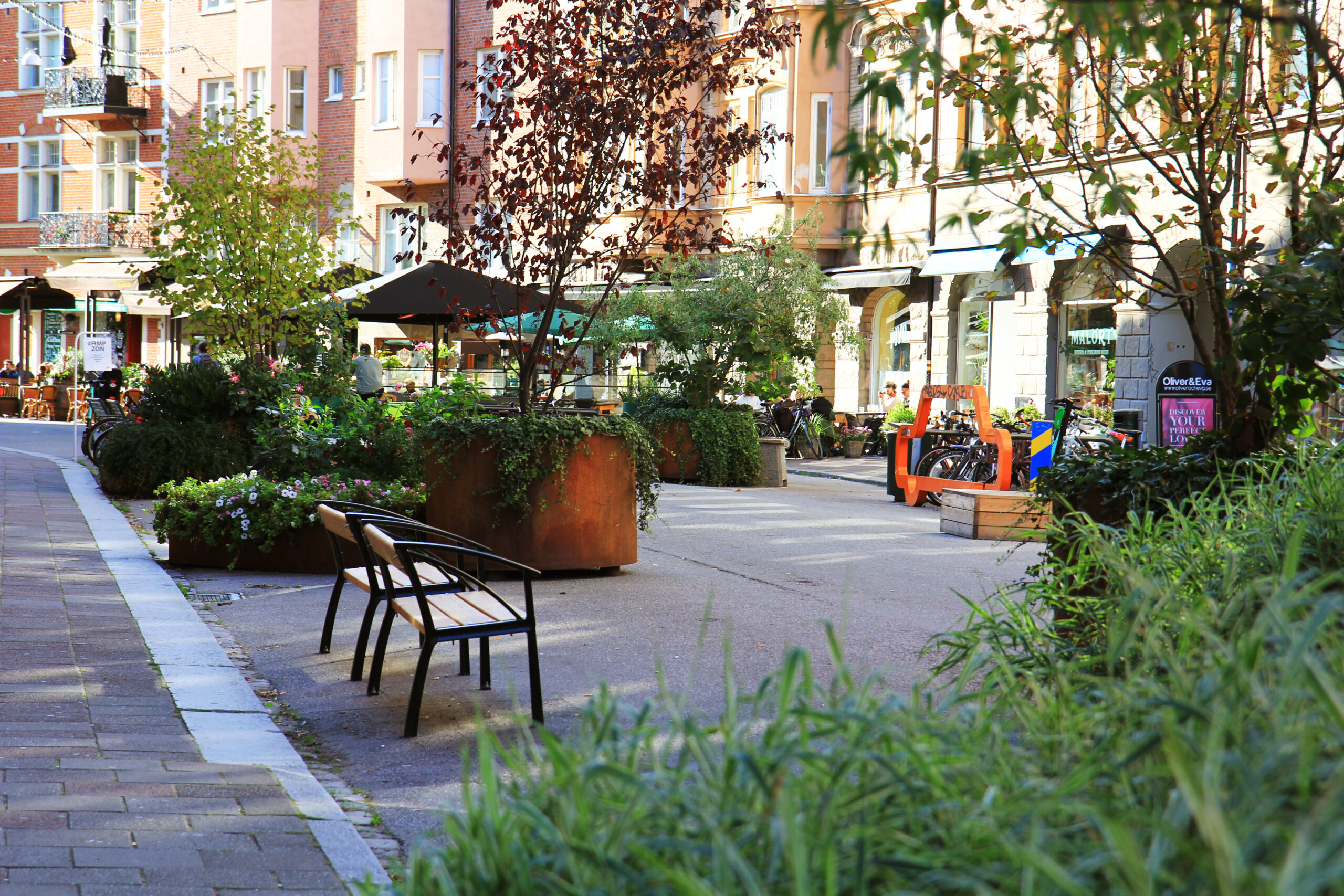 Elin Karlsson is a landscape architect for the southern Swedish city of Malmö and project manager of the summer streets in the city. Originally from Jönköping and a resident of Malmö for 8 years now, Elin is also involved in the planning and design of parks, public squares and streets there.

We first came in contact with Elin as we began coverage on various Summer Streets in Sweden. As great fans of Malmö’s urbanism and city space, we valued having this opportunity to learn more from Elin about specific developments.

Elin: Since I’m the project manager and official point of contact for the summer streets, a part of my job is to engage with citizens, students, researchers, other municipalities etc who are interested in or have questions about the summer streets.

When it comes to the planning and design process of the summer streets, we’re currently a group of about ten people that are working on the project. Aside from me, the group also consists of two more landscape architects, traffic planners, a dialogue expert and more. None of us work full time with this project, though. All of us work with other projects within the city as well.

The summer streets in Malmö are in operation between April-October, but the planning and organization of the project is ongoing throughout the year. Aside from the actual physical design of the streets, a lot of time is spent on the overall planning of the project, performing traffic analysis’ and having dialogue with the businesses and property owners along the streets.

We put in a lot of time and effort into designing every summer street, always according to the site specific requisites of that particular street. This is quite time-consuming (in comparison to, for example, having a finished set of furniture that can be moved around and placed anywhere) but we find it to be quite important in order to achieve a good result.

Pedestrian Space: How has the reception to the Summer streets been?  If there has been criticism, what are some of the critiques about it?

Elin: Overall, the reception of the summer street has been positive, especially now that the concept has become well-known among the citizens and businesses. During the first years at Friisgatan, however, some people were more skeptical about the concept. There was also a lot more car traffic at Friisgatan during the first year than there was supposed to be, since people hadn’t yet understood what the concept was about. The amount of car traffic made a lot of people disappointed, I think.

Pedestrian Space: How does Malmö city engage and gather public opinion about the pedestrianized Summer streets?

Elin: We do surveys where we ask the general public as well as residents and businesses at particular summer streets about their opinion. We don’t do it every year, but rather during the last year that the project is in operation at a particular street. Most of our summer streets are in operation during a three year time period. During the last year, we conduct a survey at that particular street. Then it’s up to the politicians to decide if the concept should continue or not.

Elin: I would recommend taking a closer look at two large urban developments that are ongoing in Malmö right now. One of them is Varvsstaden, a new urban residential and business district that’s being developed in the central parts of the city. It’s situated where the shipbuilding in Malmö took place in the past. Quite a few of the large buildings where the actual shipbuilding took place are being reserved and re-used in this new district. This development is ongoing right now and some parts are already finished. This new district will connect to the central parts of Malmö with a new pedestrian and bicycle bridge over the canal.

The other area is Nyhamnen, situated just north of the central station in Malmö. It’s an old harbour area that is going to be redeveloped into a new, urban residential and business district that faces the waterfront. Environmental sustainability is an important theme of this redevelopment. Because of it’s close proximity to the very central parts of Malmö, focus will also be put on the walking and biking experience to, from and within Nyhamnen.

On Movement around Malmö

Pedestrian Space: How do you move around Malmö and what is your favorite mode?

Elin: I don’t own a car, so I always walk or bike whenever I move around in Malmö. I live within the very central parts of the city and I’m able to reach all of my everyday destinations (my workplace, the food store etc) by walking. But I would say that almost all districts in Malmö are reachable by bike at least, so whenever I’m going to another district I travel by bike.

Pedestrian Space: What is your favorite street or sidewalk space in Malmö?

Elin: I live just by the canal and enjoy taking a stroll along the canal promenade, preferably all the way to Malmö’s, in my opinion, most beautiful park- Slottsparken. I guess I’m not a street person, I prefer walking where there are no cars, a lot of greenery and some quiet. But if I were to recommend some streets or sidewalks, I would recommend the district called St Knut. More specifically, I enjoy a specific part of that district that consists of low residential buildings and large, green courtyards. The trees and bushes of the courtyards hang over the surrounding fences, and the effect of the greenery spills out into the public streets. That, in combination with the smaller scale of the buildings, creates an intimate and calm streetscape that I enjoy.

Pedestrian Space: Malmö is a really walkable city but certainly probably with room for improvement too.  What do you think is still an area for improvement for walkability in Malmö?

Elin: I think Swedish city planning is, in general, focusing a lot on bicycling right now, at least in Malmö. That’s a positive thing of course, but I believe that it’s important to remember that bicyclists and pedestrians have different needs. To walk isn’t only to travel from point A to point B, but it’s also to stroll, to recharge and to experience your city at a slower pace. When traveling by car or bike, you don’t have the opportunity to stop and look closer at a tree, take a rest at a bench or smell the first flowers of spring. I think that designing for pedestrians also means that you need to design spaces that really enhance the positive aspects of moving at a slower pace. I also believe that an important aspect is to consider that there are pedestrians with different needs that use the same urban spaces. Some walk by feet, some use a wheelchair, some are children, some are older etc.

Thank you Elin for your time!

View our ongoing coverage of Malmö at Pedestrian Space here.