With interest to begin featuring coverage of ecological city initiatives and green urban projects, we publish a feature that our Editor did on Oslo as the ‘European Environmental Capital of 2019 for another platform in the summer of that year.

In June 2019, for coverage for Pacific Roots Magazine, we met with Marianne Alfsen, Head of Communications for Oslo European Environmental Capital 2019 (Office of the Governing Mayor, The City of Oslo) to learn more about Oslo’s dynamic environmental and urban profile and the attributes that contribute to the ecological, economic and social health of Norway’s beautiful capital.

As we chatted at length over coffee, Marianne deftly wove together multiple threads of storytelling about developments in the city and environmental facts including:

Among Oslo’s many features that contribute to ecological mindedness of the city and it’s citizens as well as why it was named the European Green Capital of 2019 are the following:

-The conservation of natural areas and restoration of the waterway network as well as habitat. Oslo has managed to preserve its nature and biodiversity, in and around the city centre, through decades of massive urban development. Oslo has also reopened waterways that were lead through pipes as the city grew, enabling the city to better manage stormwater, as well as creating new recreational areas for people and new habitats for plants and animals.

– The city’s plan to cut emissions by 95 % by 2030. Oslo is not planning to become carbon neutral, which means you can buy quotas and offset emissions elsewhere, but to cut actual emissions in Oslo.

-Oslo as the ‘Electric Vehicle Capital of the World’. As of the first quarter of 2019, 71 % of all new cars sold in Oslo were electric vehicles!

-Promotion of the city’s “circular economy”, both in the sense of growth of jobs in this area as well as development. For example, biogas produced from bio-waste and city sewage is used to fuel city buses and waste trucks.

Marianne’s passion for the work she does and for the city itself were so readily apparent and inspiring. But it was something in particular she said that also captured the essence of what Oslo is- a spirit of place. “In Winter I can go 20 minutes away and ski in the forest and come home the same night, put on my high heel boots and go to a great club in town,” she noted. The flexibility of a clean, vibrant city core surrounding by forests and waterways teeming with life is something to indeed be respectful of and take honor in guardianship for. 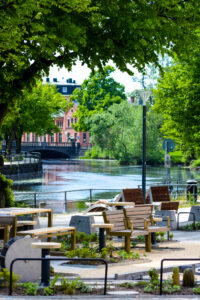