Kensington, San Diego: Some thoughts on one of the city’s 15 minute neighborhoods 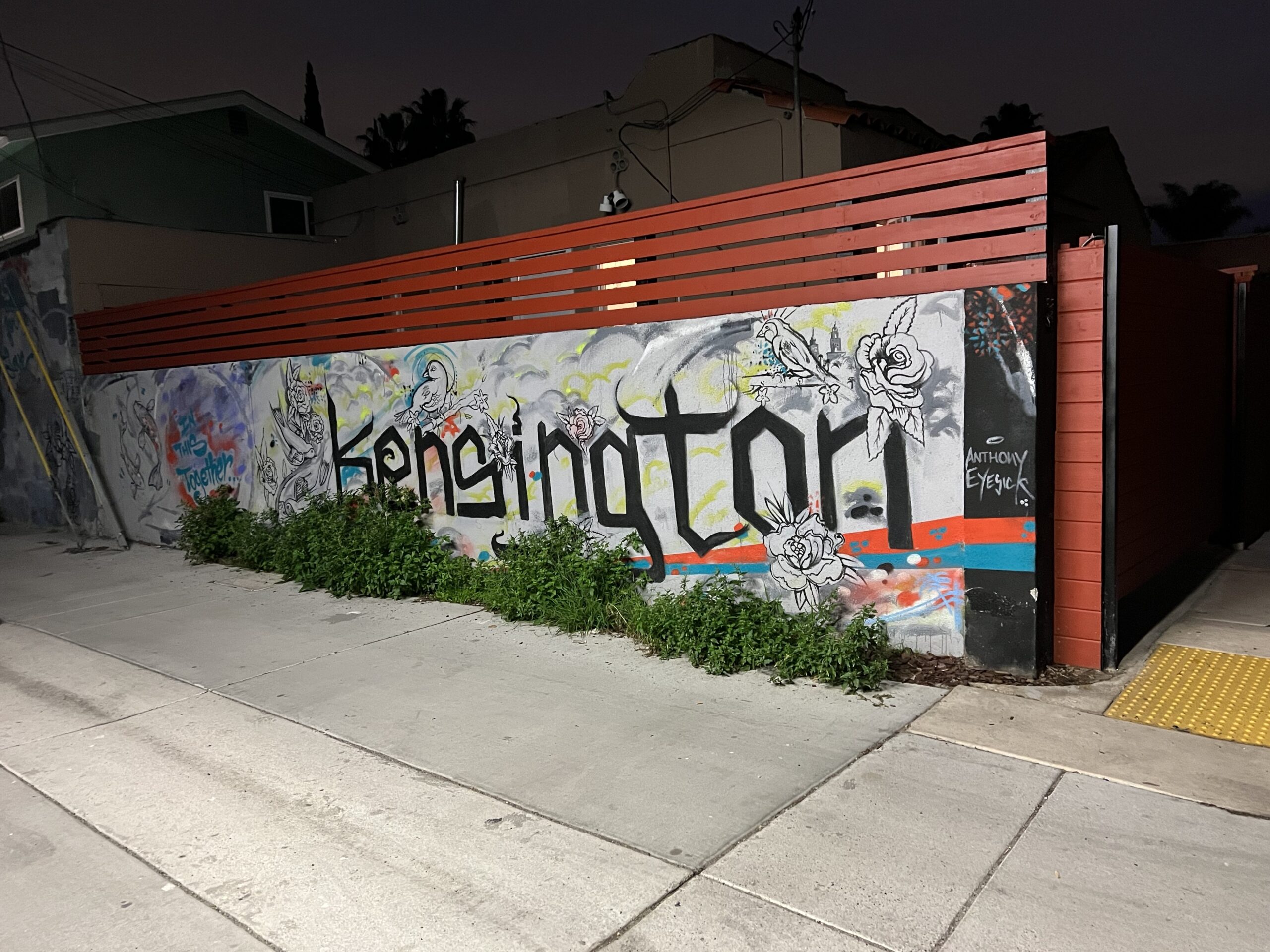 Kensington is a streetcar suburb that was founded in 1910. A small pocket on the eastern edge of Mid-City, Kensington is sometimes called the only real neighborhood in San Diego. It is deemed one of the most walkable communities in San Diego -with cute Spanish revival homes, neighborhood churches, mixed-use zoning, and a library serving as the focal point of its Main Street. Despite the homes being a century old and rather small, they’re consistently listed between $1 – $2 million dollars. This appraisement is driven, at least partly, by the neighborhood’s desirability.

Surrounded by canyons on three sides and covering around 1.3 square miles between, one can walk from the most northern canyon overlooking Mission Valley down to the southern boundary along El Cajon Boulevard in about thirty minutes. Walking to all of these destinations is not only comfortable (thanks to the gridded design and narrower streets) but also pleasant. On this walk, a pedestrian encounters two business corridors: Adams Avenue and El Cajon Boulevard. Along these business corridors exist grocery stores, medical and dental clinics, restaurants, and banks. Several educational and cultural institutions, including pre-k, elementary, and middle schools, churches, a library (and multiple Little Free Libraries), and parks are scattered between the corridors. In recent years, the city and community have also pushed forward bicycle infrastructure to further extend the 15-minute radii: running along the I-15, the commuter route and the Terrace Drive bike boulevard connect Mission Valley (condos, commercial stores, and trolley stations) in the north to City Heights (homes, schools, parks, and transit centers) in the south.

Kensington is a beautiful neighborhood, a neighborhood where one can tell the time of day with their senses: the pre-schoolers giggling in the morning, the church bell chiming at noon, fresh burgers grilling for dinner. A neighborhood where passers-by make eye contact, smile, and chirp “good afternoon”. Though, as with life, you get the good with the bad.

Kensington is a quintessential white enclave – with median household income nearing $200,000 and median age in the 50s, the neighborhood is rife with NIMBYs, with, presumably, higher Neighbors for a Better San Diego membership rates than anywhere else in the city. As San Diego grows, places like Kensington must adapt and accommodate this growth in a way that allows for infill development rather than further perpetuating sprawl.

or, how can we keep Kensington walkable

Denser mixed use zoning on Adams

Kensington has been able to seamlessly (and tastefully) integrate multi-family properties with single-family homes. You can see examples of this on Marlborough (both near Adams and Hilldale), Park Place, and Edgeware Road.

However, the main street, Adams Avenue, has a number of parcels that allow for a residential-commercial mixed-use development that are currently underutilized. These buildings, between Marlborough and 42nd Street, could easily allow for more density by building up. Further east, up until Van Dyke, we see more underutilized mixed-use parcels, as well as commercial-only parcels that can and should be rezoned to allow for housing.

Allowing for more (and more diverse, both ethnically and socio-economically) residents will give more people an opportunity to live, work, and shop at the local businesses that the KenTal Business Association is so proud of.

Increased service on the 11

The MTS 11 is a vestigial street car line that, once the tracks were ripped (or more accurately, covered), was converted into a bus line. It connects San Diego State University to Downtown San Diego, running along multiple residential, business, and cultural districts. I, for one, absolutely love the MTS 11 route, which generally does a great job of connecting a number of lively neighborhoods throughout the Mid-City region.

The 11 currently runs between 4:37 AM and 11:06 PM on weekdays, with headways ranging between 20 and 30 minutes. These headways are closer to 30 – 40 minutes on weekends. Because a long portion of its route runs through Adams, a pretty busy thoroughfare, it unfortunately becomes victim to the traffic therein.

What’s more interesting (or rather, annoying) is that the bus does not serve Kensington period after 10 PM, during which time it bypasses the enclave by turning left onto I-15, merging onto the I-8, before then coming back south onto Montezuma Road to end its route at San Diego State University. I imagine that this deviation was forced by Kensington residents that wanted to ensure “others” could not easily access their neighborhood after a certain time. This isn’t a huge issue for me – I can get off on Adams & 39th, cross over the I-15, and get home. However, it may be more than enough to discourage more vulnerable citizens. Let’s end this detour.

Increased headways and a dedicated bus-only lane on a stretch of Adams would go a long way in improving the reliability of the MTS 11. Improving this line could help alleviate some of the congestion on Adams as well as reduce the high demand for parking in the many business districts it serves.

Market in the north part of Adams (specifically, Marlborough Drive and Hilldale Road)

When walking down Marlborough from the northern tip to the southern tip, you’ll run into a market on Adams (Stehly Farms Market) and a cute neighborhood market on Monroe (Monroe Market).

These corner shops allow nearby residents to quickly grab necessities, such as milk and toilet paper, as well as novelties, such as snacks and drinks, without having to drive. Unfortunately, no such thing exists north of Adams. Thus, I see residents living in the northern tip of Kensington absolutely flying down Marlborough (more on this later) to get goods from Stehly Farms or a coffee from Starbucks.

Interestingly, at the intersection of Marlborough and Hilldale, there is a single commercial parcel that is used as an office building. Really cool idea! Absolute fan – but how about converting the street level into a market/cafe that can serve local residents and keep the upper level for offices? That intersection in particular, as I mentioned earlier, has a mix of multi-family and single-family homes, so providing a market would benefit a significant number of residents. On top of this, it allows for the older residents to easily grab food and other necessities without having to drive or wait on a caregiver. As well as reducing overall vehicle miles traveled, it would also provide a much-needed commons for that part of the neighborhood.

Marlborough Drive is a straight line cutting through Kensington, running from the canyons up north to El Cajon down south. Because of that, it serves as a collector road for the many residents north of Adams, delivery vans, maintenance trucks, and guests. At the same time, it’s lined with homes, a pre-school, and a church. Despite that, cars are often flying down the wide road, which has a “speed limit” of 25. In a walkable neighborhood filled with older residents, dogs, and school children, you’d think greater effort would be given to slowing down traffic.

The addition of speed dips and chokers would help greatly reduce speeds between intersections, while a generally narrower roadway would force caution throughout.

Kensington’s sidewalks are relatively wide and have the added benefit of being lined with trees. Unfortunately, a majority of these trees are California Fan Palm trees – large, swaying monocots that don’t offer much other than occasionally dropping heavy dead leaves on windshields and pedestrians. Most importantly, they do not provide shade. Kensington, being further inland, gets hot, leading to discomfort and potential heat stroke for children, the elderly, pets, and really, anyone. Let’s replace them with something native: oak, pine, maple, whatever, as long as it provides shade, sound deadening, carbon sequestration, and ~aesthetic~ for the beautiful neighborhood, residents, and guests.

Kensington is a beautiful, 15-minute neighborhood – one that I hope to spend many years in. Unfortunately, with increasing home prices, skyrocketing rent, and an unwillingness to change, the opportunity to experience this community will be limited to only those that were able to get in half a century ago. By allowing for greater density, easier access via transit, and improved walkability (better-distributed services, safer streets, and more trees), Kensington can greatly reduce its dependence on the car and (and parking), serve as a model for other communities, and welcome more people.

Anar is a car-enthusiast turned walkability advocate. He seeks a holistic understanding of the built environment. He believes that human-centric urban design will go a long way in combatting climate change, encouraging sustainable practices, and improving health outcomes – both mental and physical.

2022-06-29
Previous Post: Media is the Action of Our Work
Next Post: Breaking the Cycle of Auto Dependence: Chat with Lorenzo Mele