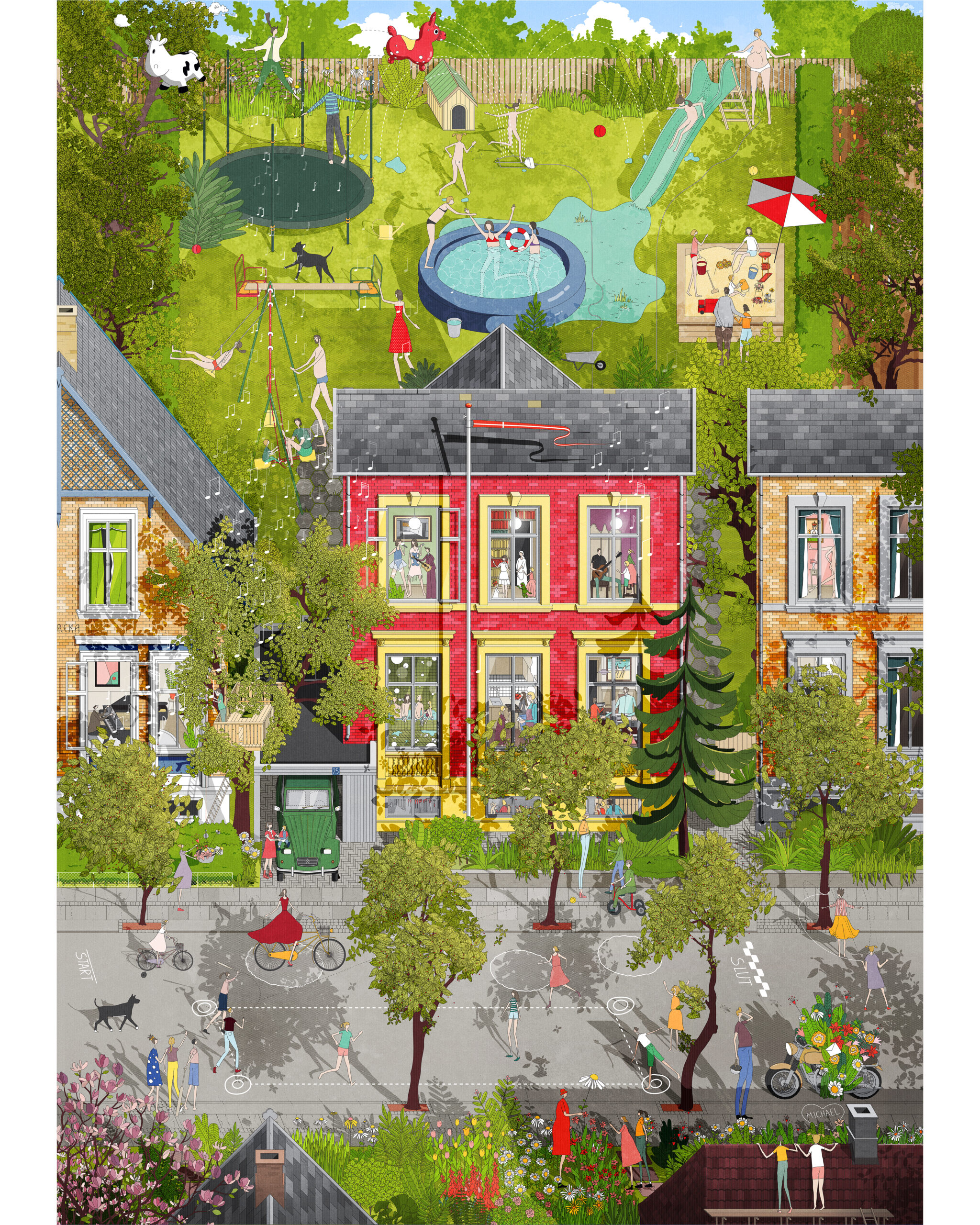 Raised in Lithuania and based in Denmark since 2008, Vilius Thorsgaard Frølunde-Vizgaudis is an illustrator and architect whose visuals of Oslo originally caught our eye. We are happy to feature Copenhagen based Vilius as our Friday Artist Feature!

Vilius on his background and what originally brought him to Copenhagen

Vilius: I grew up in Lithuania, but moved to Aarhus, Denmark to study architectural technology back in 2008. After finishing, I realized I wanted to work more creatively and thus started on a new bachelor’s degree in architecture in Aarhus. It’s now been 13 years in Denmark apart from 3 years that I’ve spent in London,UK, where I worked for firms like Asif Khan, Studio 8 architects, and Haworth Tompkins as well as studied my master’s degree at the Bartlett.  For some years I also worked remotely for a Norwegian architecture firm, drawing private homes and renovations.

Pedestrian Space: We first learned about your work via the Wired UK article about Oslo and cities pedestrianizing their cores. Can you share more about the work you created for this piece?

Vilius: Oslo recently has undergone some interesting experiments to explore the possibility of the city without cars and what benefits it brings for the local business, people living in the area and guests. I was very excited to be contacted for the commission because the idea of a car free city fascinates me as an architect. The piece that I created was a two double perspective composition – one showing a close-up of the explosion of life that becomes possible when cars are excluded from the street and one showing that on a city scale.

My inspiration for the piece came largely from Norway’s National Day celebration on May 17th – a day where entire city centers in the country become car free. When living in London, I sometimes imagined the busy shopping street Oxford Street being car free – imagine what a different atmosphere that would create! In fact, I think there were plans for that at some point, but they ditched it due to the majority of its residents being against it.

Pedestrian Space:  We love all the depictions of mobility and life in this private commission you did.  Can you share a bit about the creation of this piece?

Vilius: This piece was for a client that wanted to capture the fondest memories of her and her children’s childhood in one image. The street, the house, and the backyard created the three frames for the memories and although the image is full of people, characters are the same, just in new situations, at different ages – a kind of timelapse, if you want. Interestingly the street here is not only a place for mobility but also a place of play, social engagement, and community.

Pedestrian Space:  As an architect, it is understandable how the built environment is the main feature in your work. Can you share more about this as well as other motifs and influences in your work?

Vilius: I like to take inspiration from the built environment for my work and explore the play between changing scales and merging perspectives to create drawings filled with small stories and narratives – much like our experience of the built environment in real life. At the same time, my influences and inspirations come from many different places in art and architecture, all depending on the specific work. To name a few examples I have used inspirations from works of Hieronymus Bosch, Georges Seurat, Mobius, Francois Schuiten, Laura Stoddart as well as my dear professor and mentor CJ Lim.

Pedestrian Space: What are your preferred mediums to work with?

Vilius: I always start with hand sketches with pencil or pen. It’s a quick way to get to the composition that I am happy with after which I would move into a digital medium combining 3D modeling and digitized hand drawings to produce the final work.

Pedestrian Space: Does Copenhagen, your home base, feature often in your work?

Vilius: Not specifically, but there are a few unreleased pieces and pieces in the works that depict parts of Copenhagen city. For me, it is somehow much more difficult to be inspired by the surroundings I see every day. Inspirations more often come from new exciting places and buildings that I encounter for the first time.

Up until recently I have always moved around the city by bike. When I grew up in Lithuania I walked or cycled almost everywhere. As a teenager I was a part of a street bicycle club where we would meet, tune our bicycles and cycle together in the city. When we lived in London I also mostly travelled by bike to Bartlett and to work, which sometimes seemed a bit suicidal compared to Copenhagen. You have to share the lanes with cars and busses that are rarely aware of your presence on the road.

A few months ago we moved just outside of Copenhagen to Søllerød to be closer to nature and try to avoid places with a lot of car traffic. Ironically, I am now myself faced with a need for a car. However, I still commute to work by bike and train as that is the most enjoyable mode of transportation as well as a good excuse to exercise every day.

Vilius on how he moves around the city

Vilius on aspects of cycling and walkability in Copenhagen:

Copenhagen is one of the world’s leading cities when it comes to biking. The infrastructure and its maintenance are amazing and that makes it incredibly easy to cycle all year round. For example, the bike lanes here get cleaned from snow way before the roads in winter, you can bring your bike to the metro and train and the traffic lights are most often synchronized for the speed of bikes and not cars. When it comes to walking in Copenhagen, the distances here are short compared to London, and public transportation is everywhere (buses, trains, waterbuses, metro), which makes it a lot easier to get around by foot.

There are a lot of beautiful forests in Søllerød where I live now, but I also greatly enjoy a stroll or a swim along the promenade in Islands Brygge in central Copenhagen.

Other favorite parts of the city are the newly developed Nordhavn (quite successful modern development in the city) – the waterfront here is a good place to hang out after work. Another one is Kødbyen (Meatpacking District) – a great place for finding something interesting to eat or going out. Both places only have a little traffic which makes them very attractive places to hang out in.

Vilius on favorite spaces in the city to spend time & walk

Vilius on contemporary challenges for Copenhagen in terms of urbanism & liveability:

I think Copenhagen is an amazing city when it comes to its urban life. No wonder it is at the top of the various lists for most livable cities in the world. However, as the city is increasingly growing and densifying the challenge becomes how do we do that sustainably. I believe we must proactively engage in the challenges of the future – not only in terms of Co2 emissions in connection to the new developments, generating green energy, producing more food locally – but also in terms of tackling social sustainability, providing possibilities for all.

For example, during the Covid-19 pandemic real estate prices in the city skyrocketed and that will put pressure on future generations to be able to afford to live in the city. It will be crucial to tackle this issue if Copenhagen as a city, and Denmark in general, wants to keep their cherished status as a state of social welfare and equality.

Another challenge for the future will be mobility. Although Copenhagen has an amazing public transport system, with newly opened Metro lines, the majority of the city’s infrastructure is still largely based on the highly inefficient means of transport  – a private car. I think the future mobility lays somewhere in between the public and private, and although I do not have answers for the issues, I greatly enjoy engaging in the discussion in my works both as an architect and illustrator.