How Sri Lanka Could Turn this Crisis into an Opportunity

Sri Lanka is currently going through the worst economic crisis of its existence. The root cause of the situation is complex, but the main reasons include the Covid pandemic and its negative impact on the tourism industry, political mismanagement and corruption, and the rise in fuel costs due to the war in Ukraine. However, the outcomes are clear and painfully visible no matter how you describe the root causes.

Out of all the disastrous effects of this economic crisis, the most prominent and most noticeable is the petroleum shortage. The shortage has put the entire country at a standstill, ruining livelihoods and worsening the economic crisis.

The country’s total petroleum demand in 2019, according to Sri Lanka’s energy balance report, by Sri Lanka Sustainable Energy Authority, was 174.3 PJ. The transportation sector accounted for 139.3 PJ of consumption, representing 79.92% of total petroleum consumption. In other words, the transportation sector is the primary petroleum consumer in Sri Lanka. As a result, it was also the first and hardest hit during this fuel crisis.

Like most other south Asian countries, public transportation is given less priority to private vehicles in Sri Lanka. The quality of public transport is poor and considered a secondary mode of travel, while individual motor vehicles have been given priority. As a result, personal vehicle ownership is relatively high for a country with a low-median income level. This is despite the high cost of vehicles due to high vehicle taxation. 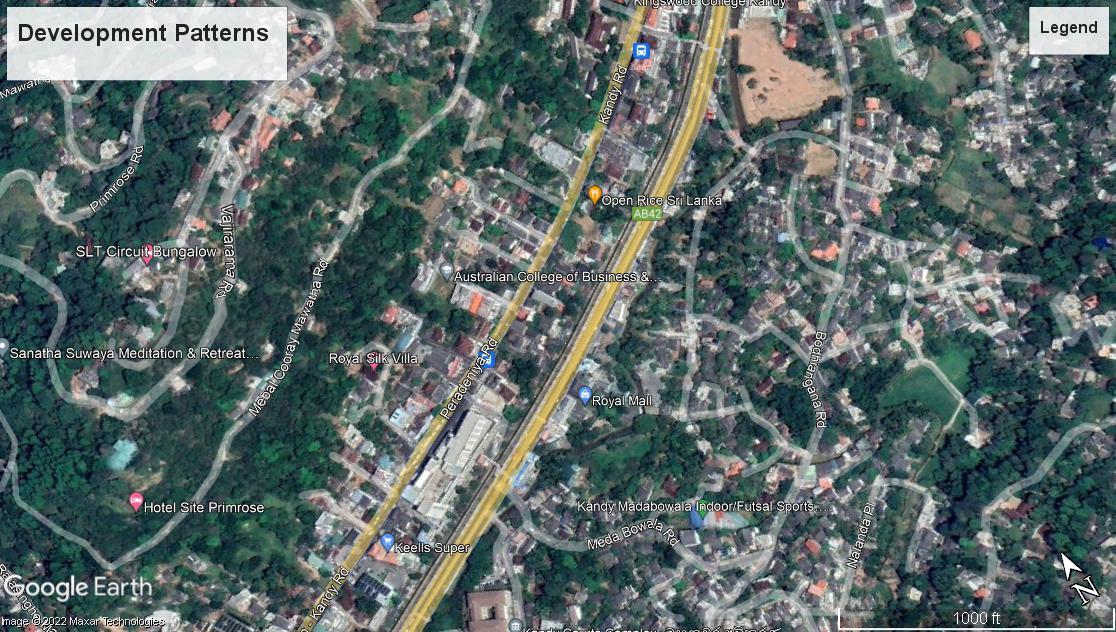 As seen in Figure 1, linear development patterns along arterial roads can be seen across Sri Lanka. These roads function as both roads and streets (stroads-coined by Strong Town). The pattern has contributed to the urban sprawl significantly. On the other hand, the road network directs all the vehicles into these arterial roads creating traffic congestion.

The public transportation network of Sri Lanka mainly consists of buses run in mixed traffic and trains, primarily run between cities. Since trains are not available outside main intercity railway lines, buses can be considered the primary mode of public transportation in almost every part of the island.

However, throughout the fuel crisis, the government or any other public or private authority has given no significant priority to the public transportation sector. Buses, the primary mode of public transportation, have reduced the number of their fleet due to the fossil fuel shortage. As a result, the frequency of buses has significantly dropped, and the few remaining buses have become highly overcrowded during peak hours. This has further discouraged people from using public transit and forced to use individual vehicles, worsening the fuel crisis and traffic congestion.

Since the 70s, Sri Lanka has been developing its cities and towns along the main arterial roads. These roads function as both streets and roads (stroads-coined by Strong Towns). On the other hand, the road networks have relatively low connectivity and, in most cases, follow a hierarchy from primary arterial roads to collector roads with dead ends, similar to Cul-de-sac networks, with less order. As a result, cities and towns have sprawled outward without limits, and the majority of people live in the suburbs, far away from city limits, making daily commuting long, inefficient, and tedious.

As seen in Figure 2, fragmented road networks are a common development pattern in Sri Lanka, especially in suburbs and peri-urban areas. This increases traveling distances significantly and reduces walkability.

On the other hand, this sprawling auto-oriented infrastructure development came with a substantial financial cost. Especially the large-scale road development projects implemented after the civil war ended in 2008 began to gather a tremendous amount of debt. These infrastructure projects couldn’t yield the return of investment simply due to their sprawling nature, a phenomenon known to urban planners today.

Even though the auto-dependent built environment has reduced the livability of cities and towns while piling up a massive debt throughout the decades, the eventual downfall of this pattern became visible only recently. The fuel crisis has proven that a built environment that depends on automobiles cannot function in a crisis. Thanks to the mixed-use development patterns common throughout the country, people have been able to purchase their essentials from nearby amenities while contributing to the local economy.

How to Ignite the Transformation

As seen in Figure 4 above, most urban areas have inconsistent built densities across the urban landscape. This is mostly due to the lack of regulations related to building density, such as, building height regulations. This has resulted in an overall low built density within cities, creating sprawl, housing shortages, and mobility issues, to name a few.

In addition to uninterrupted and prioritized public transportation, bicycles could be introduced as a mode of short-distance transportation, which could also serve as a first and last-mile travel option and a linkage between transit stations. People have already begun to see cycling as a mode of commuting, even without dedicated road space to cycle safely and comfortably. However, by introducing traffic calming measures on secondary and minor roads, it would be possible to create a relatively safe environment for cyclists and pedestrians. These measures would face considerable skepticism and opposition under regular circumstances. Last but not least, none of these measures carry a significant financial burden.

During the morning and afternoon peak hours, most vehicles travel with almost all the passenger seats unoccupied. With the fuel shortage and lack of transportation, carpooling would be expected to rise significantly. However, since the authorities have given no encouragement to introduce organized carpooling services, very few services operate at the moment.

Like most other South Asian countries, in Sri Lanka, auto-centric development is still the standard practice. Public transportation is considered an alternative mode dedicated to those who cannot afford private vehicles. Even though nowadays, public transportation is seen as the backbone of a livable city in many parts of the world, unfortunately, this awareness is still yet to be made in Sri Lanka. However, if we can exploit this fuel crisis and turn it into an opportunity to allow people to experience the convenience of quality and reliable public transportation, this would be the best chance to change these long-held opinions.

Could be the beginning of a long journey

Figure 6 shows a typical minor road in a peri-urban/suburban area. These roads typically do not have sidewalks, yet have a high traffic volume, making walking and cycling unsafe and uncomfortable.

It’s important to note that transforming Sri Lanka’s built environment would not be a simple task. I’d say it’s a journey rather than a destination. However, the first and most crucial step of the journey is to make more people appreciate the importance of quality and sustainable mobility, so people can walk, cycle, and use public transportation conveniently. Therefore, I think now is the best time to ignite this process by giving people a taste of a well-organized and well-connected public transportation network.

Divantha is an Urban Planning Enthusiast who currently works as a Sustainability Consultant. He thinks that urban planning is the best tool we have to achieve sustainable development goals and should be at the forefront of sustainability and climate discussions.