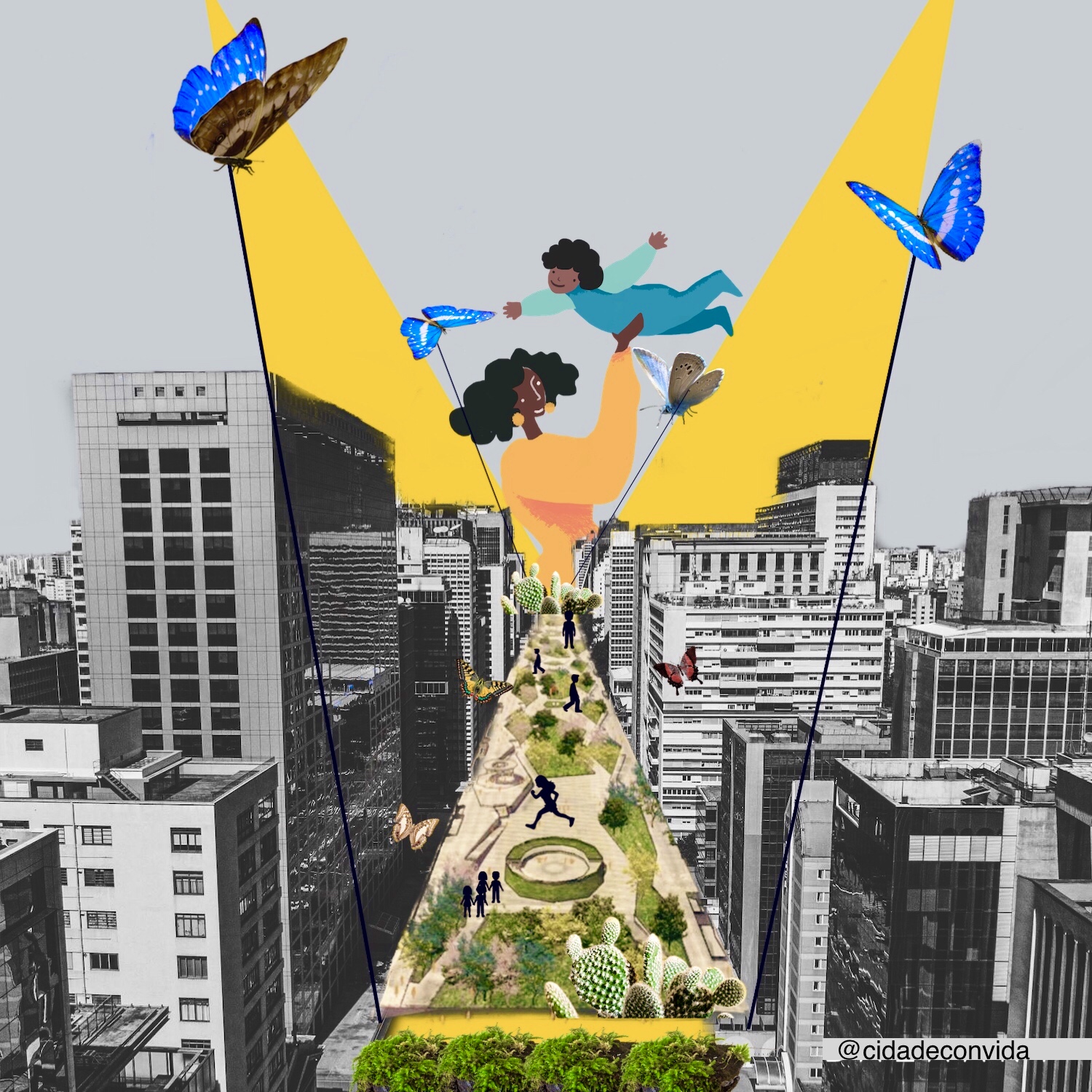 The “Cidade Convida” was created in June 2020, by 3 Brazilian architects and urban planners: Cinthia Seroni, Lídia Araújo and Mariana Cristina Ribeiro. The project arises from a desire to talk about cities and people – to create a space where it was possible to share main theories and guidelines, questions and discussions, topics such as mobility, public spaces, sustainability, housing, among others.  More than that, a space where the subjects covered are always based on human relations, fundamental to the development of collective life, in popular manifestation, heterogeneous encounter and democratic occupation of space.

We follow São Paulo based Cidade Convida’s Instagram account and always value their creative, thoughtful and engaging graphics and text on a broad range of issues related to urbanism. We were grateful to have a moment to chat with their team about their background, perspectives on media, the affect of the pandemic locally, walkability in their region and more.

Cidade Convida: Yes, we have been “Arquitetas e Urbanistas” since 2017. We strongly believe in the social role of the architect and urban planner who seeks to build more just, democratic, egalitarian and inclusive spaces and cities.

Pedestrian Space: What does your team see as some of the most critical issues facing the cities you are working in?

Cidade Convida: We see that the city on a human scale has been abandoned and forgotten. It has been developing with a modern logic in which the car is the protagonist, as well as the private interest.

Pedestrian Space: How has Covid-19 impacted your works or approach to viewing a city and its various dimensions?

Cidade Convida: Without a doubt, the pandemic has transformed the world. We who like to occupy the streets and public spaces of the city so much, found ourselves in a moment of not gathering. In 2020 it was necessary to stop and rethink how to occupy these spaces, how to adapt them to the new circumstances of everyday life, how to quickly transform a space destined to agglomerate into a space where it is possible to maintain social distance.

The debate that arises at that moment is a reflection of the type of city we currently live in and the city we want to transform and occupy in the future.

Pedestrian Space: The @cidadeconvida account is very active and your team produces really creative and engaging graphics.  What do you see as the role of media and social media for city life and citizen engagement?

Cidade Convida: Cidade Convida is completely virtual. Without the role of social media we would not be able to communicate with the world. It is very gratifying for us to share information about cities and see how people respond to it.

On their favorite sidewalk memories

In Brazil, it is still common in smaller cities and in the interior, for people to occupy the entire street. In the mid-90s, when the world was different and the level of violence less, it was even more common. However, we, as children from the countryside, have the memory of riding a bicycle and playing with friends on the street, playing ball while parents and grandparents were sitting talking with neighbors on the sidewalk.

On their favorite street

Our favorite street is Avenida Paulista in São Paulo. It is a very wide avenue, with many lanes for cars, but it is there that you can find great cultural and important buildings of the city. In 2015, Avenida Paulista was closed on Sundays for vehicles and open to pedestrians and cyclists, revealing its full potential on a human scale.

“If we put pedestrians and alternative transport as a priority, widen sidewalks, create cycle lanes and cycle paths, promote improvements in public transport, the city will undoubtedly become more accessible for people.”

On their favorite mode of moving around the city

On noteworthy pedestrian spaces in their city

On how walkability could be improved in their city

Unfortunately, what has been happening is the priority for private transportation. Widening roads does not solve bottlenecks, but makes more and more vehicles fit on the streets. If we put pedestrians and alternative transport as a priority, widen sidewalks, create cycle lanes and cycle paths, promote improvements in public transport, the city will undoubtedly become more accessible for people.