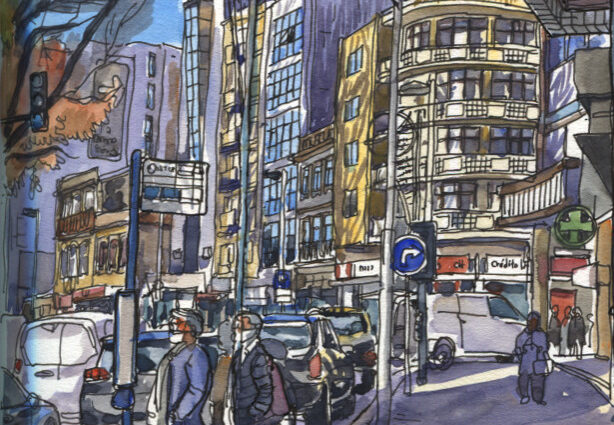 Welcome to Friday Artist Features! Every Friday we feature an artist whose work often includes themes of urbanism and mobility.

Today we are featuring Portugal-based artist Paulo Mendes. Born in Porto, Portugal, in 1965, drawing has been part of his life since childhood. Paulo studied at Soares dos Reis Decorative Arts School and started his professional life as a layout designer for a phone book company, also working for 16 years as a ceramic tile painter for the well-known Portuguese “Azulejos”. During this time, he also developed experiences in illustration, bookplate design and watercolor painting.

Since 2014 he has been practicing ‘Urban Sketching’, sketching daily for his own practice or for commissioned works, and occasionally running workshops. More recently he’s also been doing comics, an old passion from his teenage years. Paulo published his first book in early 2020 and is currently working on his next one.

Pedestrian Space: Does your city or town of residence inspire your work in any way?

Paulo: Porto is a never-ending source of inspiration. It gave me hundreds of sketchbook pages so far. I always say to my fellow sketchers from elsewhere that it is the world’s most sketchable city. It’s hilly, historical and monumental, full of architectural diversity, with dramatic views over the river Douro with its bridges and cascading houses.

I also take inspiration from other cities like Braga, some 50km to the north where I worked for many years and still visit often as I have some family ties there. I can also be inspired by any of the several towns and villages in northern Portugal, but the main source has always to be Porto, the one I was born, where I studied and worked, the one I most love and spend most of my time outdoors.

Paulo: Indeed, more than any other subject. My main goal is to capture places and I even tend to forget to include the people on them, as I’m always driven by the architecture, textures, volumes, composition or light and shadow. Inspiration doesn’t have to come from the most iconic or monumental areas, which I actually avoid; there’s a lot to catch everywhere else. The city is full of architectural contrasts and in many of its streets you can see delightful period houses and mansions aligned with skinny apartment buildings of the 70s or 80s, resulting in interesting mixes of shapes and volumes. I’m particularly attracted to abandoned houses whose textures are for me visually appealing. It’s always challenging to look for interesting sketch subjects in the apparently most “anonymous” or insignificant everyday places where no one would remember to look, within city limits or in the suburbs. Traffic signals, street art, rubbish bins, parked cars, any kind of urban element or structure, no matter how ordinary it is, can be a source for a good sketch.

Pedestrian Space: What mediums do you work with?

Paulo: I usually use a uni-ball ballpoint pen for the lines and watercolor for the colors, in a palette of eight colors. Sometimes I feel the urge to go minimal and just take a simple blue BIC ballpoint, whose versatility never ceases to amaze me. I do not use any sort of digital drawing or painting tools.

Pedestrian Space: How do you move around the city and what is your favorite mode?

Paulo: I usually use the metro (which in Porto is actually a light rail or a modern tram) to get into the city and once there I walk around, taking a bus only when I need to save time or go somewhere more distant. Most of my displacements in the city are by walking and I do it a lot. It keeps me fit and allows me to observe and often capture in my sketchbooks whatever catches my attention. I never get bored by walking, even if I do the same trajectory for several days, as there is always something new to see.

Pedestrian Space:What is your favorite street or sidewalk space in your city of residence?

Paulo: My favorite street / area is the Cedofeita area. Cedofeita street itself is an old, narrow and partially pedestrianized artery. I like its buildings, the shops, the people. It’s not as crowded as other popular pedestrian streets as Santa Catarina or Flores, but the atmosphere is definitely more special. It also happens to be in the center of a full set of other favorite places that attract me like a magnet and are easily reachable from there, as the Miguel Bombarda Art district, the Palácio gardens – one of my favorite hideaways – the Torrinha and Mártires da Liberdade streets where I like to peek into the antique shops, or the lively Carlos Alberto, Leões and Picaria squares. On weekends, small markets take place here and there selling art, antiques, second-hand books, handicraft, organic products, etc.

More to the coast, I like to take a 10 min metro journey to Matosinhos beach and from there walk to Praia da Luz, already inside Porto. It’s a 30 min seaside walk across several beaches and a huge geological mess of rocks that are pretty hard and challenging to sketch. It’s something I do all year-round once or twice a week, and in late Spring and Summer, as soon as the weather allows, the towel and sunscreen become companions of the sketching equipment.

Pedestrian Space: Are there other pedestrian areas in your city you like to spend time in or appreciate?

Paulo: I like the above-mentioned streets of Miguel Bombarda and Santa Catarina, although sometimes this last can be too crowded. I like the Brito Capelo street in Matosinhos, a wide pedestrian artery that still keeps some of its former splendor when it was its most prestigious commercial area. It’s also a fascinating showcase of 20th-century architecture, all its decades and styles represented and is crossed by the metro as it was by the old tram network on its heyday. More to the north, in my visits to Braga, I like to get lost in what may be the largest pedestrianized area in Portugal, which includes almost all central streets, the Cathedral historical area, and several squares. They are well arranged, full of life, cheerful and a must for shopping, socializing, walking around, or having a drink in some of the many café terraces.

Pedestrian Space: What challenges as well as opportunities do you see with issues of walkability in your city?

Paulo: Porto is a city of narrow streets. On the non-pedestrianized ones, the sidewalks can be sometimes narrow and easily obstructed by uncivilized car parking, construction sidings, loading/unloading, forcing pedestrians to walk in the road, and making it pretty hard if not impossible for people with disabilities. It’s also a hilly city, where you can expect to go up and down in most trajects, this being even more evident in the historical area, where many houses are only accessible by extensive stairways. Besides this, It’s a delightful city to walk, but not definitely one of the easiest. In the city center I see many streets that seem to have the potential to be turned into pedestrian streets, or mixed with pedestrians and public transport. Unlike Braga, where most of the pedestrian streets and squares in the center are connected, in Porto, they are all isolated from each other, and since the city center is much bigger I imagine it wouldn’t be an easy challenge to connect them in order create a truly walkable wide center, although the benefits from it would be countless.

Pedestrian Space: What are your thoughts about sustainable urban developments in your city?

Paulo: On the architectural side, I still see many old traditional buildings ruined or being torn down to give place for new apartment blocks that could be built elsewhere, or not built at all. Fortunately, there are also good examples of proper rehabilitation. I’m not against modern architecture or new construction, as the city cannot be an untouchable sarcophagus, but this is a balance that needs to be handled carefully in order not to destroy the city’s character and charm that makes it so unique. On the other hand, modern construction should include new sustainable materials instead of the old battered concrete-and-brick formula that not only can be heavy and aesthetic unpleasing but also thermally inefficient, turning homes into fridges in Winter, and ovens in Summer. I dream of green rooftops and balconies and/or vertical gardens being mandatorily included in new constructions.

But not only the old buildings are of high value, but also their backyards, often long and narrow, with their gardens and trees, forming large green areas inside blocks, where people once grew their vegetables and picked fruits. Despite being hidden from the street, these tiny private paradises are often cemented to make car parks or wiped out to make room for garages or warehouses, when they should be cared for and preserved as a treasure of biodiversity and sustainability.

Community gardens, organic gardening, or even food foresting should be encouraged, taught and practiced in every available public space, in parks or unused land plots.

On the mobility side, my perception is that the city still relies on private car use for displacements, and public transport is still looked at by many as a resource for those who can’t afford a car. This mentality is changing although slowly and as far as good alternatives become available.

The city once had a large tram network that was reduced to the actual three historical routes mostly for tourists, and today’s public transport offer is composed of suburban trains, buses and the metro network – actually a modern tram, as said above – that became the spine within city limits and took many cars off the streets. It runs frequently and efficiently and also reaches a few pretty distant outskirts. But it doesn’t cover all the metropolitan area and newly planned extensions won’t add too much. The remaining offer is by diesel or gas-powered buses and a few battery-electric buses. Some recent decisions are, in my opinion, questionable: For example, there is a new planned BRT (Bus Rapid transit) line to connect the central and coastal area along an extensive avenue that had once a dedicated tram corridor. I don’t see any logic in replacing a tram corridor with a dedicated bus line even if battery-powered, as in my opinion battery vehicles aren’t “sustainable”. But the BRT seems to have a strong lobby – see the case of Moscow – and looks like a new trend among municipal authorities with unclear visions for mobility that are easily dazzled by new shiny toys that do nothing but reinventing the wheel. Until 24 years ago, the city had an extensive and sadly missed trolleybus network, including the world’s last double-deck ones in regular service, and their withdrawal was, in my opinion, a huge mistake.

I see now more people cycling, especially younger generations. A true pedestrianized network in the city centre could encourage more of this too, as the traffic hustle and narrowness of the streets can make them hostile and somewhat dangerous for bike users. Some bike lane attempts are being slowly implemented. These are just small steps, but hopefully good indicators of a more sustainable future in this exciting, creative and highly attractive city.

Visit Paulo online at his blog: https://postalguarelas.blogspot.com/ & on Instagram at https://www.instagram.com/pauloj.mendes/